This is a really cool development in image processing: an algorithm that corrects underwater pictures so they’re rendered accurately, as if taken without water. 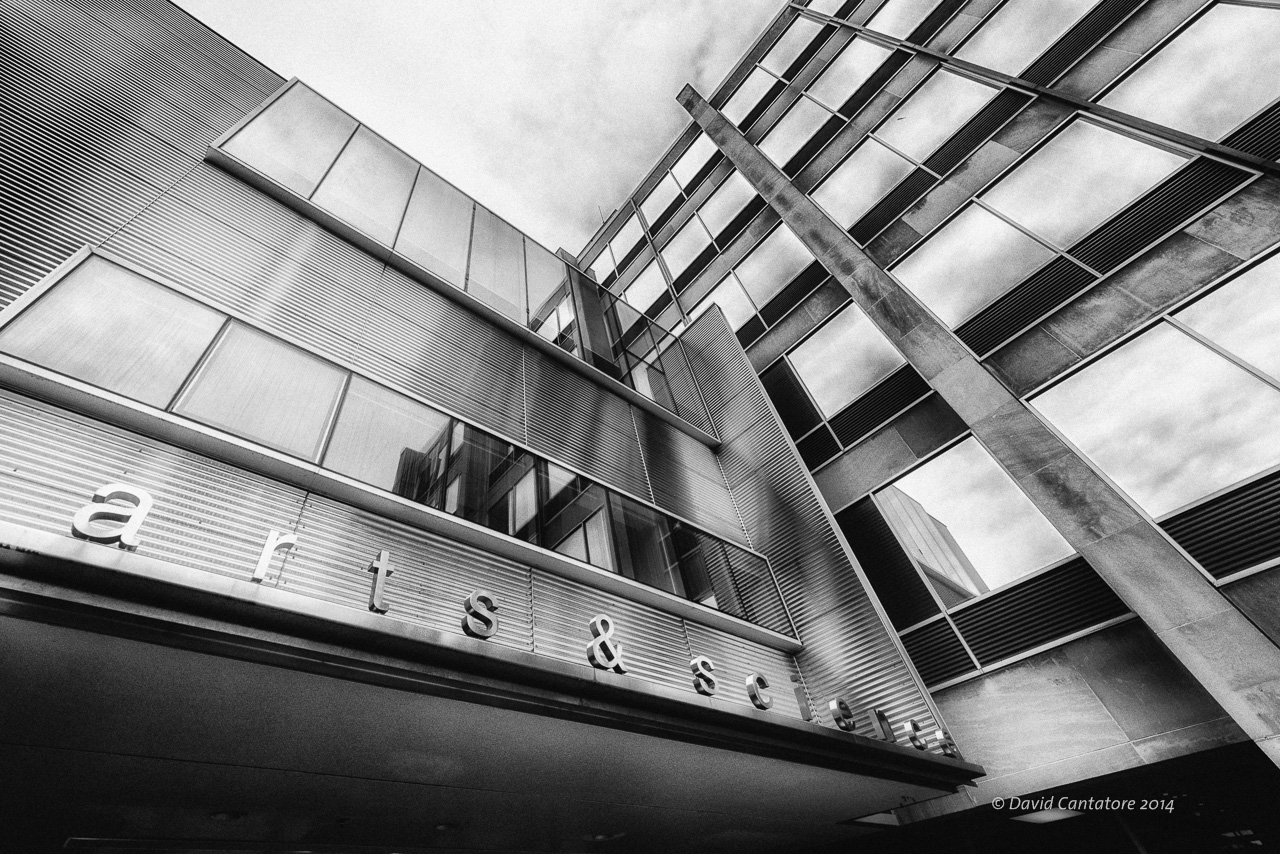 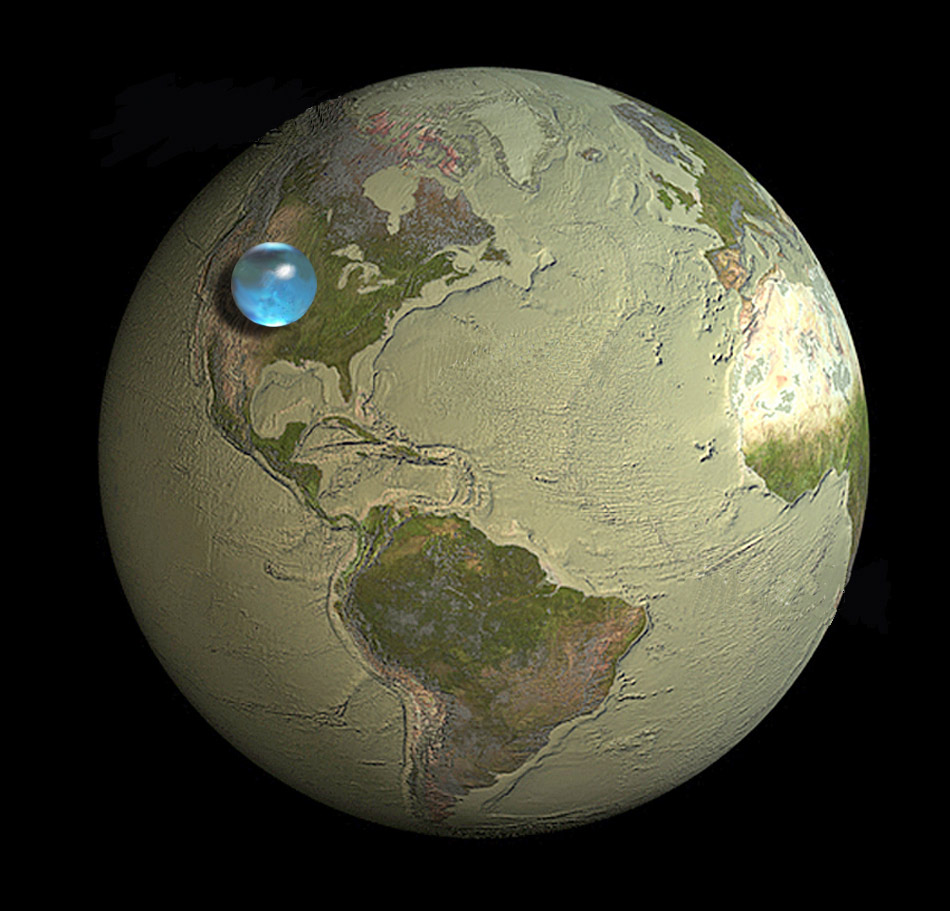 This picture shows the size of a sphere that would contain all of Earth’s water in comparison to the size of the Earth. The blue sphere sitting on the United States, reaching from about Salt Lake City, Utah to Topeka, Kansas, has a diameter of about 860 miles (about 1,385 kilometers) , with a volume of about 332,500,000 cubic miles (1,386,000,000 cubic kilometers). The sphere includes all the water in the oceans, seas, ice caps, lakes and rivers as well as groundwater, atmospheric water, and even the water in you, your dog, and your tomato plant.

It’s hard to realize what a 1,385km wide sphere represents. The International Space Station orbits at about 300km altitude. Amazing.

via How much water is there on Earth – USGS and BoinBoing

In light of this article (and many more political theories), one could easily correlate this to certain political ideologies that tend to favour education for the select (rich) few and leave the vast majority uneducated, thus easily manipulated, even by the worst dumbass in history.

The democratic process relies on the assumption that citizens (the majority of them, at least) can recognize the best political candidate, or best policy idea, when they see it. But a growing body of research has revealed an unfortunate aspect of the human psyche that would seem to disprove this notion, and imply instead that democratic elections produce mediocre leadership and policies.

The research, led by David Dunning, a psychologist at Cornell University, shows that incompetent people are inherently unable to judge the competence of other people, or the quality of those people’s ideas. For example, if people lack expertise on tax reform, it is very difficult for them to identify the candidates who are actual experts. They simply lack the mental tools needed to make meaningful judgments.

Read the rest of this fascinating article on People Aren’t Smart Enough for Democracy to Flourish, Scientists Say – Yahoo! News. 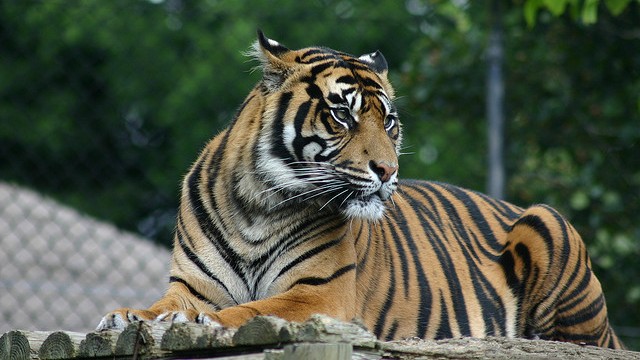 Alan Turing was a brilliant mathematician, cryptographer, and logician, plus the father of computer science and artificial intelligence. He also worked in biology, and now, 58 years after his tragic death, science has confirmed one of his old biological hypotheses.

via io9 – Scientists confirm Alan Turing’s 60-year-old theory for why tigers have stripes. 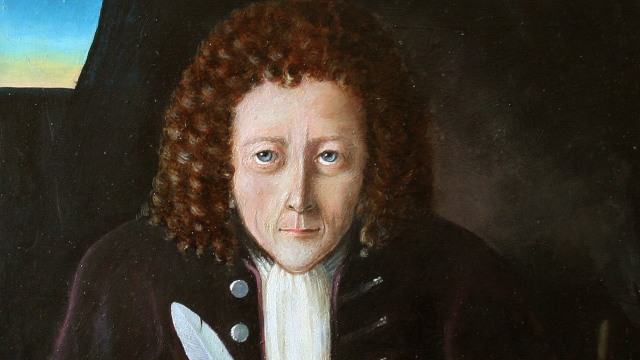 Robert Hooke discovered the cell, established experimentation as crucial to scientific research, and did pioneering work in optics, gravitation, paleontology, architecture, and more. Yet history dismissed and forgot him… all because he pissed off Isaac Newton, probably the most revered scientist who ever lived.

Very interesting article that highlights the need for diplomacy and ethics in the scientific establishment. Oh and the importance of not making genius enemies.

To pick a fight with Isaac Newton was one thing, but Robert Hooke made one other huge mistake: he died twenty-four years before Newton did. In 1703, the year of Hooke’s death, Newton became the President of the Royal Society. It was during Newton’s presidency that the only known portrait of Hooke was destroyed — the portrait you see up top is a new work by artist Rita Greer that is based on what few contemporary descriptions of the man survive. The more salacious version of the story says that Newton intentionally had the painting burned, though it’s possible he simply let it be lost or destroyed when the Royal Society moved headquarters.

via io9 -Was Robert Hooke really the greatest asshole in the history of science?.

Something tells me this can’t end well. On the other hand, this may push for new methane-harvesting technologies.

Dramatic and unprecedented plumes of methane – a greenhouse gas 20 times more potent than carbon dioxide – have been seen bubbling to the surface of the Arctic Ocean by scientists undertaking an extensive survey of the region.

The scale and volume of the methane release has astonished the head of the Russian research team who has been surveying the seabed of the East Siberian Arctic Shelf off northern Russia for nearly 20 years.

Very interesting read about the dangers of modern wheat, which doesn’t have much in common with the one our parents/grand-parents ate and why our generations are fatter and sick with auto-immune diseases such as Celiac or Crohn’s or even rheumatoid arthritis among other niceties.

Quick: Name a common food, consumed every day by most people, that:• Increases overall calorie consumption by 400 calories per day • Affects the human brain in much the same way as morphine • Has a greater impact on blood sugar levels than a candy bar • Is consumed at the rate of 133 pounds per person per year • Has been associated with increased Type 1 Diabetes • Increases both insulin resistance and leptin resistance, conditions that lead to obesity • Is the only common food with its own mortality rateIf you guessed sugar or high-fructose corn syrup, youre on the right track, but, no, thats not the correct answer.The true culprit: Triticum aestivum, or modern wheat. 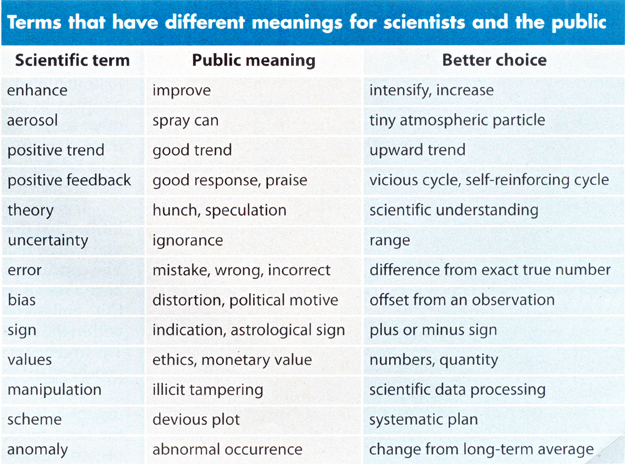 There’s a lot to ponder in this table. It strikes me as an important document – a compilation of one of humanity’s most tragic miscommunications.

via The American Geophysical Union’s blog and Bad Astronomy

There are hundreds of subglacial lakes buried deep beneath the Antarctic ice, each one completely isolated from the rest of the world for hundreds of thousands of years. And now, scientists are preparing to find out just what’s down there.

Scientists say they have found a way to disarm the AIDS virus in research that could lead to a vaccine.  Researchers have discovered that if they eliminate a cholesterol membrane surrounding the virus, HIV cannot disrupt communication among disease-fighting cells and the immune system returns to normal.

This website uses cookies to improve your experience while you navigate through the website. Out of these, the cookies that are categorized as necessary are stored on your browser as they are essential for the working of basic functionalities of the website. We also use third-party cookies that help us analyze and understand how you use this website. These cookies will be stored in your browser only with your consent. You also have the option to opt-out of these cookies. But opting out of some of these cookies may affect your browsing experience.
Necessary Always Enabled
Necessary cookies are absolutely essential for the website to function properly. These cookies ensure basic functionalities and security features of the website, anonymously.
Functional
Functional cookies help to perform certain functionalities like sharing the content of the website on social media platforms, collect feedbacks, and other third-party features.
Performance
Performance cookies are used to understand and analyze the key performance indexes of the website which helps in delivering a better user experience for the visitors.
Analytics
Analytical cookies are used to understand how visitors interact with the website. These cookies help provide information on metrics the number of visitors, bounce rate, traffic source, etc.
Advertisement
Advertisement cookies are used to provide visitors with relevant ads and marketing campaigns. These cookies track visitors across websites and collect information to provide customized ads.
Others
Other uncategorized cookies are those that are being analyzed and have not been classified into a category as yet.
SAVE & ACCEPT
Scroll Up
Loading Comments...